How to kick the procrastination habit – Part 2 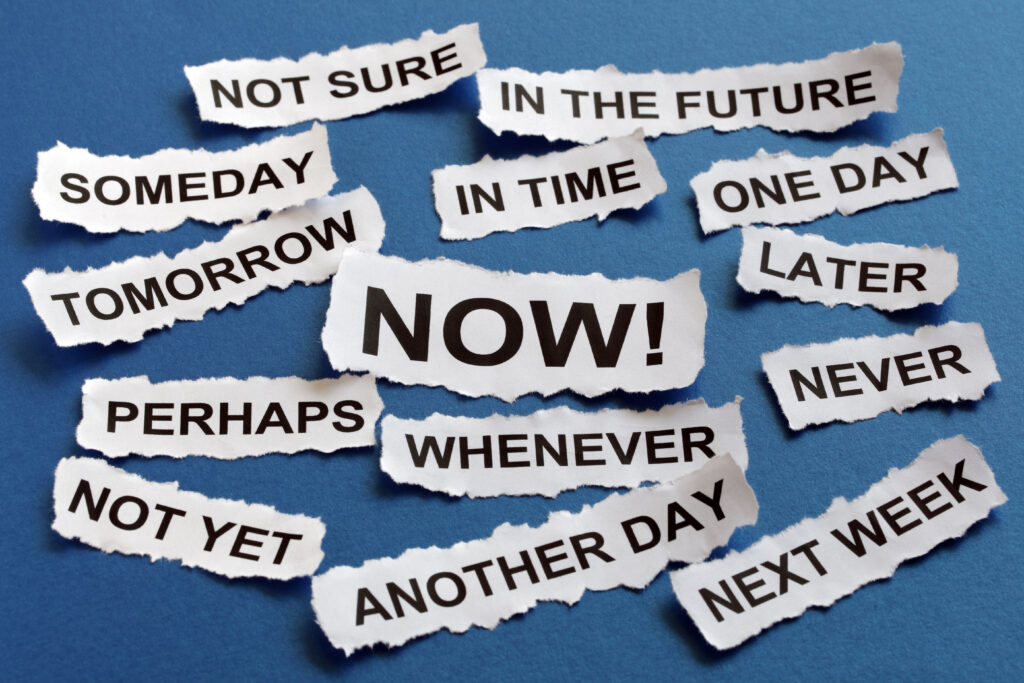 In our last FIT Matters blog, I admitted to you that if there were an award for Best Procrastinator of the Century, I’d win hands down!  If I can put off until tomorrow what can (and should) be done today, then sure as night follows day, I’m a procrastination dead cert to bet on 👍

Yet, we’re all guilty of procrastinating at one time or another.  Let’s face it, NOBODY actually WANTS to do something they’d really rather not if they can find a reason (or excuse) to put that to-do task off until another time, right?

Today we’re going to take a look at how we can KICK THE PROCRASTINATION HABIT once and for all and discover life-changing daily routines, designed to seriously raise our productivity game and encourage a much more action-oriented, energetic attitude to take us where we want and deserve to be – in both business AND life!

To re-cap, the 4 key ways to manage the PROCRASTINATION HABIT are:

Small measures of progress help to maintain momentum over the long run, which means you’re more likely to finish those bigger tasks and the faster you complete a productive task, the more quickly your day develops into an attitude of productivity and effectiveness, which spurs you on to maintain that momentum and be more productive with your outputs.

Consistency is the key when it comes to making productivity a long-term habit and prevent procrastination from creeping back into our daily habits and routines. One reason it’s so easy to slip back into procrastination time after time is because we don’t have a clear system for deciding what is important and what we should work on first.  One of the best productivity systems James Clear recommends is called the Ivy Lee Method.

Ivy Lee was a renowned business leader in the field of PR and advised Charles M. Schwab, president of the Bethlehem Steel Corporation, the largest shipbuilder and the second-largest steel producer in America in 1918 – also one of the richest men in the world, helping his business to become more efficient and profitable.

The Ivy Lee Method is a really helpful way to prioritise your day AND stay on task until each priority is completed, in systematic fashion:

Here’s what makes the Ivy Lee Method so effective:

It’s simple enough to actually work. The primary critique of methods like this one is that they are too basic. They don’t account for all of the complexities and nuances of life. What happens if an emergency pops up? What about using the latest technology to our fullest advantage? Yet often, complexity is a weakness because it makes it harder to get back on track.  Clear states “Yes, emergencies and unexpected distractions will arise. Ignore them as much as possible, deal with them when you must, and get back to your prioritised to-do list as soon as possible. Use simple rules to guide complex behaviour”

It forces you to make tough decisions. There’s nothing magical about Lee’s number of important tasks per day – 5 or 6 tasks, although there IS something magical about imposing limits upon yourself.  When you have too many ideas, or when you’re overwhelmed by everything you need to get done, this is the time to prune your ideas and trim away everything that isn’t absolutely necessary.  Imposing constraints on yourself can make you better!

Lee’s method is similar to Warren Buffett’s 25-5 Rule, which requires you to focus on just 5 critical tasks and ignore everything else.

Ultimately, if you commit to nothing, you’ll be distracted by everything!

It removes the friction of starting. The biggest hurdle to finishing most tasks is starting them. As we all know, getting our butt off the sofa can be tough, although once we actually start running it is much easier to finish our workout.  Lee’s method forces you to decide on your first task the night before you go to work and as my business mentor, Nigel Botterill, always says “today ain’t over until tomorrow is planned.”  In the beginning, getting started is just as important as succeeding at the end.

It requires you to single-task. Modern society loves multi-tasking and its myth that being busy is synonymous with being better is in fact, untrue!  Having fewer priorities leads to better work. Study world-class experts in nearly any field – athletes, artists, scientists, teachers, CEOs and you’ll discover one characteristic runs through all of them – FOCUS. The reason is simple. You can’t be great at one task if you’re constantly dividing your time and attention in 10 different directions.

Another way to overcome the trap of procrastination is to use visual cues to trigger your habits and measure your progress.  A visual cue is something you can see (a visual reminder) that prompts you to take action.  The reason they’re so important for beating the pesky procrastination habit is that visual cues remind you to START a behaviour.  Hoping you will simply remember to do a new habit is usually a recipe for failure, says James Clear.  It is much easier to stick with good habits when your environment is visually nudging you along the right path. Visual cues display your progress on a behaviour – like having a calendar that tracks your progress or a vision board or daily mantra to recite – all these things ensure you have a built-in measuring system. One look at your calendar and you immediately have a measure of your progress!

Visual cues can have an additive effect on motivation. As the visual evidence of your progress mounts, it is natural to become more motivated to continue the habit. The more visual progress you see, the more motivated you will become to finish the task.  Seeing your previous progress is a great way to trigger your next productive action – as the saying goes “if you want to SEE progress, look BACKWARD.  If you want to SEEK progress, look FORWARD”. The Paper Clip Strategy and the Senfield Strategy.  The Paper Clip Strategy is helpful for beating procrastination day-after-day by focusing on a simple truth – success is a result of committing to the fundamentals over and over again.  Clear tells the story of a 23 year old stockbroker, Trent Dyrsmid and the one simple daily habit he adopted which led to his phenomenal success.

Dyrsmid began each morning with two jars on his desk. One was filled with 120 paper clips. The other was empty. As soon as he settled in each day, he would make a sales call. Immediately after, he would move one paper clip from the full jar to the empty jar and the process would begin again. “Every morning I would start with 120 paper clips in one jar and I would keep dialling the phone until I had moved them all to the second jar” He simply committed to that basic daily habit day after day – knowing that success was all about focus and consistency. Within eighteen months, Dyrsmid was bringing in $5 million to the firm and by the age of 24, he was making $75,000 per year—the equivalent of $125,000 today. Not long after, he landed a six-figure job with another company!

The Senfield Strategy applies a similar principle and is great for maintaining consistency over longer periods of time. Jerry Seinfeld is quoted as being one of the most successful comedians of all‐time, and rated one of the wealthiest, according to Forbes magazine, reaching peak earnings of $267 million dollars in the late nineties!  However, what is most impressive about Seinfeld’s career is the remarkable consistency of it all – demonstrating his ‘secret of success’ one time to a young and upcoming comedian, Brad Issac, who approached Senfield backstage and asked if he had “any tips for a young comic.”  Here’s Senfield’s reply to the young comedian:

“The way to be a better comic is to create better jokes and the way to create better jokes is to write every day.  So, get a big wall calendar that has a whole year on one page and hang it on a prominent wall. Next, get a big red magic marker. For each day that you do your task of writing, you get to put a big red X over that day. After a few days you’ll have a chain. Just keep at it and the chain will grow longer every day. You’ll like seeing that chain, especially when you get a few weeks under your belt. Your only job is to not break the chain.”

Whether it’s the Ivy Lee Method; The Paper Clip Strategy or the Senfield Strategy that floats your boat, all these methods WILL help you kick that procrastination habit for GOOD! Remember, procrastination is the thief of time and TIME is of the essence when you’re journeying on your path to success, because time is a finite resource.

We all have exactly the same 86,400 seconds in our 24 hour day, which means we all have the same amount of opportunity to get sh*t done, right!?  Parkinson’s Law will almost certainly steal your time if you don’t keep hold of it: “work will expand to fill the time available” and that time will be readily available if you let that little pesky habit of procrastination win the day.

So grab those paper clips or red marker pens and seize control – FOCUS & CONSISTENCY is all you need to steal back that win.  #yougotthis!